You or your child have probably played charades. In a traditional game of charades, one person draws a word, for example, "angry." Without talking, that person acts out the word — shaking a fist, stomping, growling — any actions that seem angry. Eventually, someone in the group guesses correctly.

How does someone with a visual impairment play charades? They can play it well. Try these versions.


This activity was created by Wendy Sapp for Great Expectations 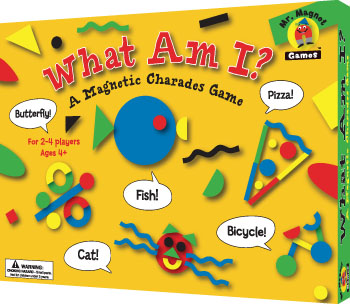 This clever twist on the classic game of charades makes guessing more fun than ever!

Choose a picture to "build" then gather a selection of magnetic shapes to craft your creation. Fabricate a flower, assemble an airplane, or build a bicycle!

Magnetic game pieces are made of a soft foam material making them chunky and easy to handle. For ages 4 and Up.